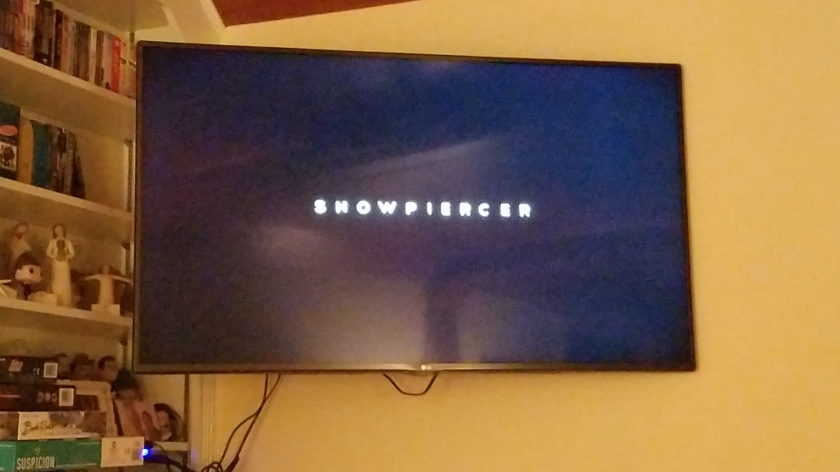 Snowpiercer presents an intriguing vision of the future that is simultaneously well thought out and silly. The concept of Snowpiercer itself is the ridiculous part. The train is laughable. The MBTA doesn’t run if we get too much snow. In a world that is literally frozen to death the odds that tracks would be kept clear all over the world is highly improbable and the odds of the train being able to clear any and all debris is bunk. But, the train isn’t really the focal point of the story. The train is much more an allegory for society rather than a literal construct.

The train is divided into three social classes. The engine and first class section of the train are controlled by the elite. The middle are economy passengers that paid for a ticket and are therefore entitled to some type of respectable treatment. The end is third class and prisoners. They didn’t pay anything to get on the train and are treated like cattle for the amusement of the rest of the train. They are also a stable work supply that can be called upon as needed. They have attempted revolution before and are about to attempt it again. The government is represented by the trains conductor Wilford who is treated as a benevolent yet distant overlord that sees to the operation of the train. He is also a vaguely religious figure who preaches a doctrine encouraging people to treat the train as a sacred object.

The cast and direction are fantastic. Chris Evans is perfect as the leading action hero. Kang-ho Song is excellent as a drugged out computer hacker. John Hurt is amazing in one of his final significant performances. Tilda Swinton is the prime minister of the train and turns in a beautiful performance as an absolutely sadistic and self serving government official. Ed Harris, Jamie Bell, and Octavia Spencer all have excellent performances in smaller roles. There is also commentary about class, treatment of people on drugs, and authority. The formation of the train may seem far fetched, but if you look at something akin to the Stamford Prison Experiment it is not so unlikely to forge a society like this in a short period of time. The fight sequences are well choreographed and the plot is well paced.

Ignore the concept of Snowpiercer and instead focus on the style and substance. There is a lot there to be admired in its direction, its commentary, its performances, and its overall value. See it.