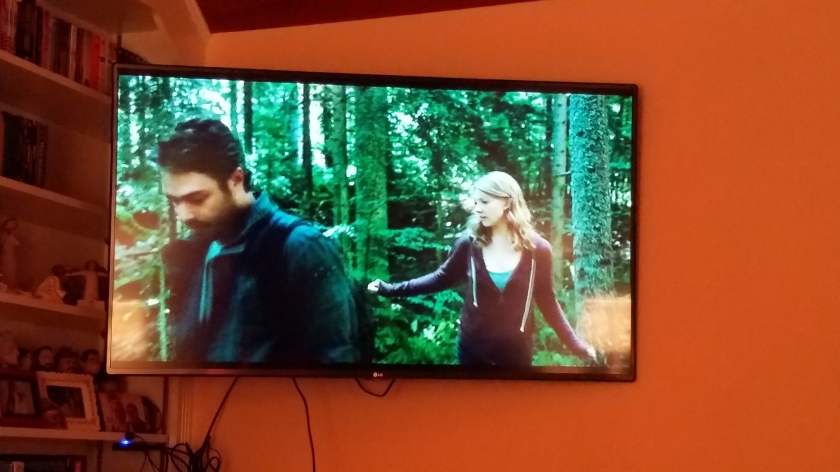 The Forest is a derivative family drama under the guise of a horror movie. There are some coherent horror elements in the movie that mostly emerge very late. Sara Price (Natalie Dormer) pulls double duty as her twin sister Jess Price that is missing in Japan. Jess is a manic mess that has attempted suicide before as a result of childhood trauma. In order to get away from her troubles she decided to go to Japan to teach English in a Japanese school. Things clearly did not go well as she disappeared into Japan’s Aokigahara Forest. Aokigahara Forest is well known in Japan as a place where people go to commit suicide.

Sara runs into an Australian journalist named Aiden (Taylor Kinney) who volunteers to help her find her sister in exchange for being allowed to write a story about the search. Against the advice of practically everyone they decide to stay in the forest overnight where unseen forces manipulate them. Sara is manipulated by the spirits of those who have committed suicide. They are mildly interesting to look at, but don’t hold much in the way of terror.

There is one nice plot point that does leave you in suspense until late in the movie and did leave me guessing, but proved to be inconsequential to the discovery of what happened to her sister. It is not a terrible movie, but it is not particular good. It is riddled with plot holes. Sara gets maggots in a cut that isn’t even remotely bad. Sara calls the Japanese police to send someone to look for her sister and they blatantly refuse. Slightly later in the movie when Sara is missing a massive search party is mustered. It is these many annoying details that detract significantly from the movie. The powers of the forest are also extremely vague. Can it influence people to hurt themselves or outright force them to kill themselves? What is it?

The concept of using the historic forest as a set piece was interesting, but its execution is hit or miss. It is not terrible. Overall, I was entertained despite its short comings in logic, but there was nothing remarkable about the movie. Skip it.