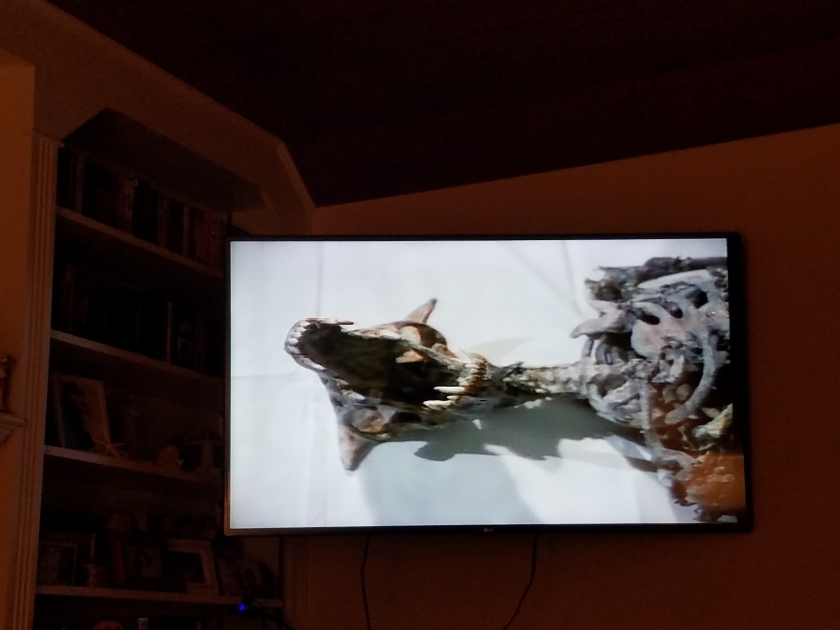 Werewolf is a difficult movie to review because it is so uniquely bad. The movie opens with three archaeologists discovering the remains of a werewolf to which they attach some goofy name. The workers are superstitious and get into a fight with the lead archaeologist who injures one of them. The injured man promptly and for no particularly obvious reason turns into a werewolf. These workers who seem like they will be important are quickly written out of the script. Other characters regularly fall out of the movie for no apparent reason boiling the cast down to three actors.

The performances could not be delivered with any more flatness. They deliver their lines like they are reading a book, but are also in a coma. There are a handful of random characters that make absolutely no sense including a militia conspiracy theorist that lives in one of the main character’s homes for no obvious reason as a “caretaker.”There are huge continuity problems with the story. One of the lead character’s hair changes with practically ever scene including not just style, but also color. The special effects are also atrocious. At a distance the werewolf looks like a man with hair glued to his face, but close up is clearly a puppet of a bat. At the midway point the plot devolves into absolute nonsense which is practically impossible to describe with any clarity.

It is a funny movie to watch because it is a disaster. It lacks all marks of quality on any conceivable level. If you want to see something unintentionally funny see it. Otherwise, hard skip it.

Lawrence of Arabia opens with T.E. Lawrence’s (Peter O’Toole) untimely death via motorcycle accident and his interment with honors in England. The men outside the church discuss how well they knew him and what they really thought of him while giving account of him to newspaper reporters. The movie then flashes back to Lawrence’s time in the British service and his actions in Arabia. The first portion of the movie involves his efforts to drive the Turks from a key city of strategic value. The second portion of the movie involves his attempts to unite the Arabs under the common cause of harassing the Turks while developing an Arab identity. The second half also gives an increased role to Prince Faisal (Alec Guinness) and his advocacy for the Arab people.

The music was entirely performed by the London Philharmonic and it is easily one of the greatest epic soundtracks of all time. The cinematography is beautiful. Many of the scenes use fantastic optical tricks to film over long distances. The interior shots are just as breath taking. The costuming is also marvelous ranging from British and Turkish officers to the various bedouin tribes. Not to mention, the decor provided for camels. The performances are wonderful. O’Toole eats up the screen as the title character. Guinness is excellent in the more minor role of Faisal. Those performances are far from the only luminary acts. Anthony Quinn is terrific as Auda Abu Tayi and so is Omar Sharif as Sherif Ali. Jack Hawkins, Anthony Quayle, and Claude Rains are also very good at representing the British in Egypt.

It could be argued that Lawrence of Arabia is the greatest epic ever made. It is excellent. See it.