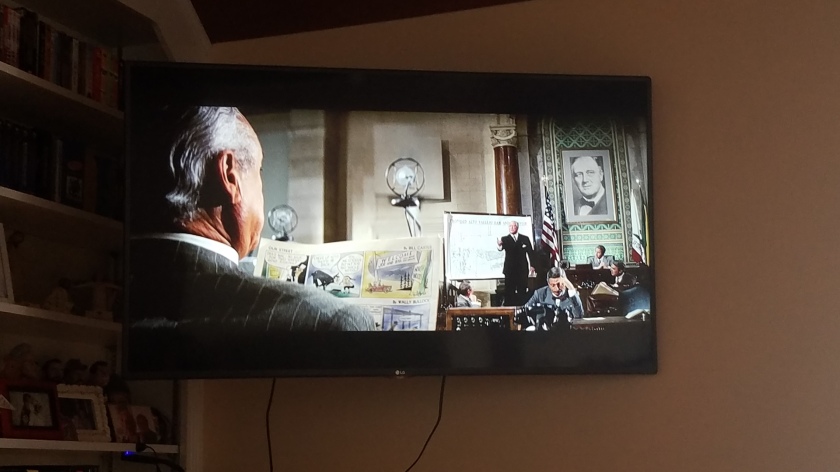 The Equalizer stars Denzel Washington in an over the top revenge flick. Robert McCall (Denzel Washington) seems to be an ordinary man. He has a job working at a big box home improvement store. He is friendly. His co-workers like him. He is helping one of them lose weight, so that he can get a job as a security guard. But, McCall has a secret past working for the CIA that he is trying to keep undercover.

Enter Teri. Teri (Chloe Grace Moretz) is an underage hooker that frequents the same diner as McCall. They get to know each other and when her pimp lays a beating on her McCall decides to get her out of the situation she’s in. This leads to a war between McCall and the local Russian crime syndicate which plays out very much like John Wick. All you need to do is swap a puppy for a prostitute. The villains are caricatures. Teddy (Marton Csokas) is a Russian fixer. When the mob has a problem they can’t fix they bring him in. Masters (David Harbour) is a crooked Boston cop that works for the mob as muscle. His accent is terrible.

Overall, the action is good. McCall is a compelling character and is fun to watch in action. Some of the action segments are over the top to the point where they are ridiculous. Some of McCall’s side exploits make you wonder how he has every been able to resist putting his skills to good use on the general populace. Some of the special effects look hokey as hell. The conclusion is predictable, but fun to arrive at.

The Equalizer is a solid action movie though unspectacular. If you liked John Wick you should like this. See it.

Casablanca is an all-time classic. I had seen many of the more famous scenes in the movie before, but never the whole picture. Casablanca is a great movie with an iconic character in Rick Blaine. Rick (Humphrey Bogart) is a hard drinking, hard living bar operator in Casablanca, Morocco. He is an American expatriate that can’t go home. He fled Paris fleeing the Nazi invasion force and left his girl behind. Now Ilsa (Ingrid Bergman) has caught up with him in Morocco and has brought her husband along with her. Rick’s pursuit of Ilsa is the primary focus of the movie.

Paired with that is the fate of Victor Laszlo. Victor Laszlo (Paul Henreid) is a freedom fighter fearing for his safety. He has escaped from a concentration camp and needs to get out of dodge. He is looking for transit papers that will get him to Lisbon and safety. A great group of supporting actors are part of the criminal and civic authority in Casablanca. Captain Louis Renault is played by the excellent Claude Rains, Rick’s primary rival Signor Ferrari is played in a fantastic turn by Sydney Greenstreet, and the best of the bunch is the squirrely Ugarte played by the shifty Peter Lorre. Victor knows one of them has the papers, but so does Major Heinrich Strasser (Conrad Veidt) who are both in pursuit of the papers. The cat and mouse game between all the characters and the scenery chewing of Humphrey Bogart make for an excellent movie with perfect dialogue.

Casablanca is an all-time classic and a must see movie. See it.

Chinatown stars Jack Nicholson as a private eye specializing in cases of infidelity. J.J. Gittes (Jack Nicholson) has been commissioned by Mrs. Mulwray to figure out if her husband is having an affair. Mr. Mulwray (Darrell Zwerling) is head of the Los Angeles Water Commission and has a lot of people that are angry with him because of an ongoing drought in the city. Gittes thinks his job is done when he catches him in the act with another woman, but then things go topsy turvy. Mrs. Mulwray (Faye Dunaway) pays Gittes a visit and she is not the woman that hired him to spy on her husband. Then Mulwray turns up dead and people’s stories don’t add up.

What comes from this is an excellent film noir in which Gittes tries to figure out who murdered Mulwray, why he is involved, and who set him up. It is a great cat and mouse affair that has endless amounts of style and panache. The costuming and soundtrack are perfect.

Chinatown is an all-time classic movie and a must see. See it.