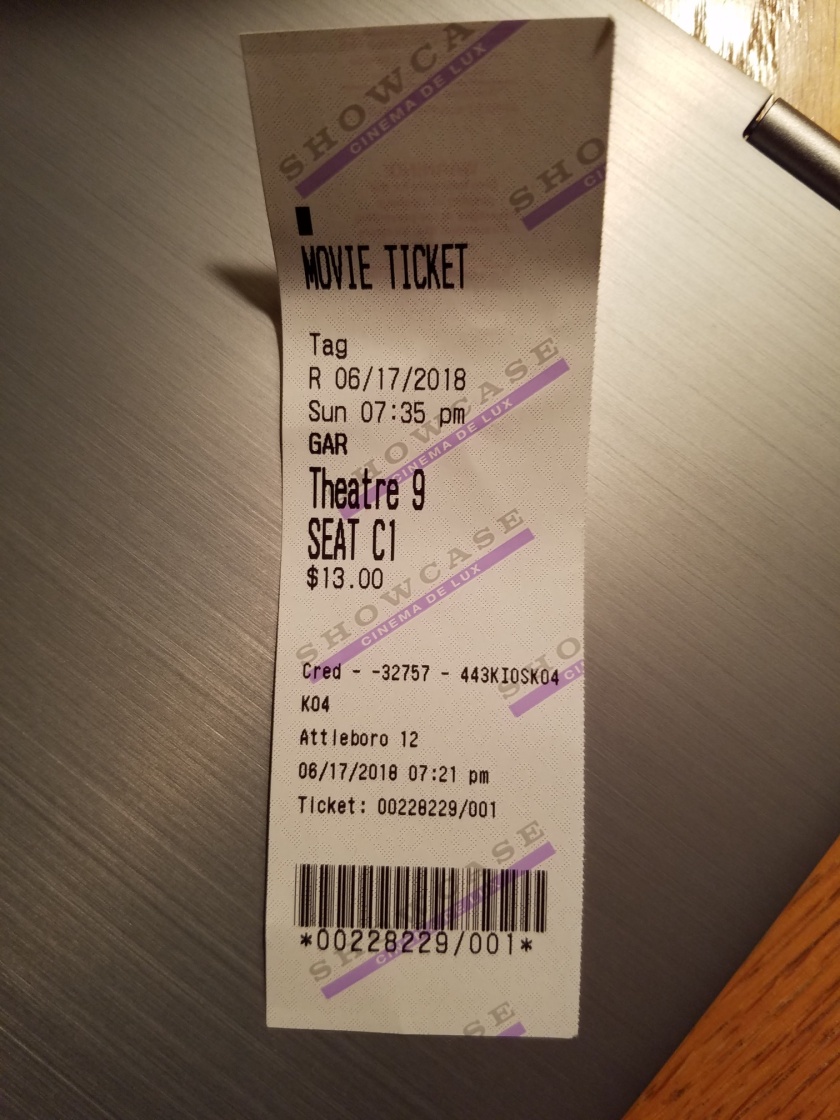 Who did I watch with?: Keegan, Mike, and Erin

Where did I watch it?: Showcase Cinema de Luxe – North Attleboro, MA

Tag has an incredibly simple premise. A group of friends has been playing the same game of tag during the month of May since they were nine years old. Now they are in their forties and the game has held their friendship together. Jerry Pierce (Jeremy Renner) is on the verge of getting married at which time he claims that he is retiring from the game. He has also never been tagged due to his incredible athleticism and commitment to strategy. Hogan Malloy (Ed Helms) gets the group back together as they visit their hometown of Spokane, Washington to make sure Jerry doesn’t retire undefeated.

Naturally, it isn’t that easy and Jerry has plotted every possible move. The ensemble cast featuring Jon Hamm, Jake Johnson, and Hannibal Burress is hilarious. Jon Hamm is a wealthy health care executive who plays the straight character through many parts of the movie, but certainly has some funny turns. Jake Johnson is a stoner that separated from his wife and has been living in Denver with his dad ever since. Hannibal Burress is a neurotic who seeks constant reassurance through therapy and logic traps. Combined with Helms and Renner they jive very well together and the movie has a lot of great off color humor.

There are also moments where the movie ditches the humorous elements and tries to insert a message. The message is simplistic, but the movie doesn’t get overly into this element and shifts quickly from drama to comedy, so that it never gets too serious.

Verdict:
The circumstances are ridiculous. The performances are sterling. The jokes are strong. This is my favorite comedy this year and one I will certainly see again. See it.

Who did I watch with?: Jackie and Students

Where did I watch it?: Work

Hercules is a traditional Disney-style song and dance movie that has a lot of great elements to use for reviewing or teaching about Greek mythology. The title character Hercules starts off as a baby. After the lord of the underworld Hades (James Brooks) consults the muses, he realizes that Hercules will prevent him from achieving his goal of freeing the titans from Tartarus. He tasks his minions with making Hercules mortal and slaying the child before he can become a nuisance. All does not go according to plan and while Hercules is made mortal he remains very much alive.

After Hercules grows up, his mortal father reveals that he was found with a amulet from Zeus around is neck. He visits a temple dedicated to Zeus where Zeus appears in the flesh and tells him that he must become a true hero in order to rejoin his family on Mount Olympus. Hercules is sent to be trained with Phil (Danny DeVito) a loud mouth warrior training satyr. After many trials and tribulations Hercule finds a love interest in Meg who Hades uses to try and take Hercules out of the picture. Ultimately, Hercules must decide what is more important Meg or the fate of the galaxy.

Hercules is a fun movie for both adults and kids. It is a great movie to review Greek mythology. See it.

Easy Rider stars Peter Fonda and Dennis Hopper as two drug dealing bikers. After making a huge deal across the Mexican border, the pair ride back across the desert en route to New Orleans for Mardi Gras. The first fifteen minutes is a series of montages as they travel across the desert. On the way they run into a stranger on the highway that takes them to a strange commune in the middle of the desert. Billy (Dennis Hopper) has no patience for the hippie community, but Wyatt (Peter Fonda) takes a liking to it. After leaving the commune they end up in arrested and thrown in a local jail.

While locked up they run into ACLU lawyer George Hanson played by Jack Nicholson who joins them on their trip. Ultimately, the rotating cast of characters take some drugs and rant and rave about various things. They do what they want. The movie is about the counter culture and how people in the counter culture are pretty much harmless, but treated like trash by mainstream society as they are pushed further and further to the fringes. It is a movie about the close of the 60s and the beginning of the 70s.

The big problem with the movie is that it is pretty boring for long stretches. It is like hanging out with people that are in an altered state of mind when you are straight. It really isn’t very interesting. They might get into some antics, but it is not as enjoyable as if you were right there with them. The plot is ultimately too unimportant and the movie relies too much on imagery that after a time is just redundant. This is a problem to the point where a dramatic moment happens in the plot and the duo proceed ahead to go eat dinner. They are out of step with mainstream America and treated poorly. It is not a complicated message and it takes a long time to get there. Ultimately, they are brutalized by America because they are free.

It was not the movie I expected to see. It is an American classic, so see it. But, do not go in expecting a traditional movie. It is very much of the beat generation.