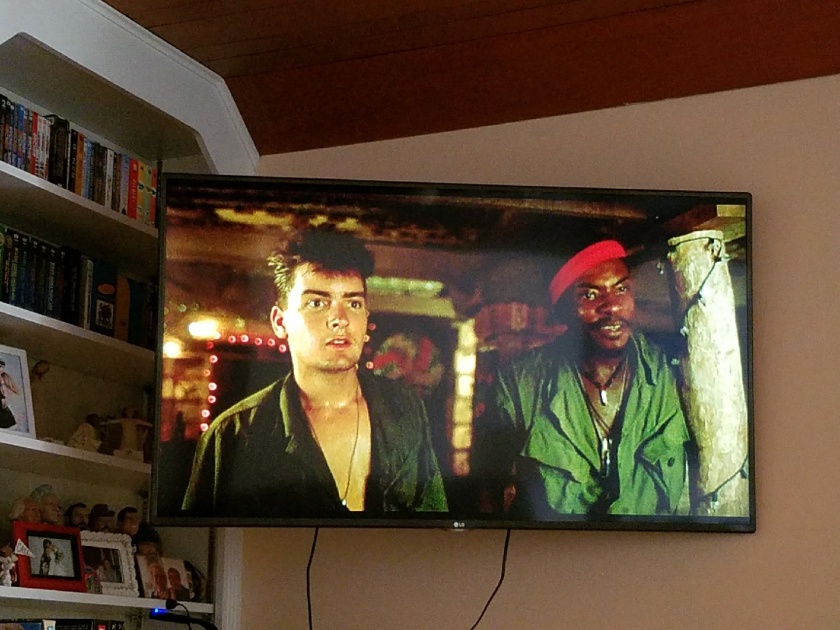 Platoon is an anti-war movie in the form of a bloodbath. Charlie Sheen is the leading actor in Platoon, but he largely acts as a blank slate for the viewers interpretation of the war. Chris (Charlie Sheen) reflects in his journal, but in the moment he tends to have very flat affect. It leaves the viewer pondering what he is thinking and how he is absorbing the Vietnamese nightmare unfolding around him. He is surrounded by a cast of characters that feel just as trapped and vulnerable as he does, but there are two men that have learned to love the war.

Sgt. Barnes (Tom Berenger) features like the warrior side of Marlon Brando’s Colonel Kurtz from Apocalypse Now. He is a consummate soldier. He may or may not believe in the cause, but he definitely believes in his own invincibility. He is an incredible soldier, but also takes advantage of and abuses the natives. While interrogating villagers in one scene he steps over the edge and gives a still relevant view of how an ordinary person living in a war torn nation can be brought into the war.

These events bring him into conflict with Sgt. Elias (Willem Dafoe) who has taken a much more humanist approach to the war. This is not to say that he is sitting around picking daisies and singing Kumbaya. He fights with tenacity, but is able to draw the line between the Vietnamese people and the soldier in the jungle. The platoon divides into two camps. One camp believes in Barnes total war approach and the other believes in the more reasonable approach of Elias. This builds to the movies dramatic climax.

Aside from Barnes, both groups of people are fairly sympathetic. These are ordinary people in a terrible situation and their reactions vary from controlled to insane. It feels genuine. The actors that make up the platoon include Keith David, a young Johnny Depp, Forest Whitaker, and the Candyman himself Tony Todd. John C. McGinley is most stand out in the minor roles as a character that chooses the wrong side and gets burned for it.

It is a great movie. See it.

This is the most embarrassing first watch of the year though there will be another one coming in a week or two. Schindler’s List is one of those epic movies that I’ve watched cut up into clips often, but I’ve never seen the whole thing as one coherent film.

Schindler’s List is one of the most powerful movies ever made. It is told in vignettes that traverse the length of World War II focusing on the plight of the Jewish people. Oskar Schindler (Liam Neeson) is a Nazi industrialist that aims at war profiteering. He wants to take advantage of the slave labor the Jews can provide and the conditions of the war that necessitate various purchases. He has no business skills, so he recruits Itzhak Stern (Ben Kingsley) to run his business. In the mean time Schindler does the two things he does well; womanizing and schmoozing. Schindler knows that palms need to be greased and Nazi officials need to be bribed for his business to be a success. He does an excellent job at it and makes a lot of money.

His conscience is clean until he meets Nazi officer Amon Goeth. Goeth (Ralph Fiennes) is a barbarian. He shoots Jews at a whim and inspires terror in the entire population of his camp. He lacks any redeeming qualities. Schindler tries to convince Goeth that being just is its own reward and after trying it for a day shoots a young boy because he isn’t able to get stains out of his bath tub.

Schindler discovers or develops a conscience that seems like it was always there. He makes pots instead of shells and ultimately values lives instead of profits. The end of the movie is devastatingly emotional as the survivors from Schindler’s factory place stones on his grave alongside the actors that portrayed them in the film. Everyone should see this movie. It provides every reason for why people in positions of authority need to be highly monitored and unorthodox approaches to the truth or treatment of human beings need to be highly critical.

This is a movie that will be forever relevant. See it.

Movie Title: The Fast and the Furious

Who did I watch with?: Stephie and Keegan

Keegan lives The Fast and the Furious “lifestyle” and has been *cough* suggesting *cough* I watch this movie series for years now. I have finally given in…and honestly it wasn’t that bad. That is not to say that the movie was strictly speaking good.

The Fast and the Furious features Paul Walker as undercover cop Brian O’Conner. He is investigating a string of big rig robberies by a gang of car enthusiasts. He infiltrates the crew of Dominic Toretto (Vin Diesel) after taking an interest in his sister. Guess what? Toretto and his crew are the thieves! Surprise! The plot of the movie is pretty much irrelevant, so I’m going to start talking about some other aspects of the movie.

The acting is about as hammy as it gets. Paul Walker, Vin Diesel, Michelle Rodriguez, and the rest of the company (aside from Ted Levine) deliver lines like they are reading off the script. The dialogue is hilarious. There are so many things that are unintentionally hilarious. My particular favorite being the straight faced talk of attending “Race Wars” in the dessert.

My biggest question though is why does anything happen outside of the main plot? None of it really ever gets explained. The biggest question certainly revolves around Johnny Tran. Toretto and Tran are rivals. Got it. Why? What makes Tran so violent? Why do they have so many guns? Why does Toretto’s crew seem like a fairly non-violent group while they are facing off against organized crime? Things happen with no rationale.

The Fast and the Furious is also a huge anachronism looking back on it from 2018. The extremely valuable Panasonic television and DVD player combinations that are worth millions of dollars wouldn’t be worth $1,000 dollars in 2018. Seeing how things have changed in such a short period of time is fun and hilarious.

With all those criticisms you are likely expecting a skip, but honestly I found it kind of charming. Is it a cinematic classic? No. But, it is entertaining throughout not in spite of, but because of its cheese factor. See it.