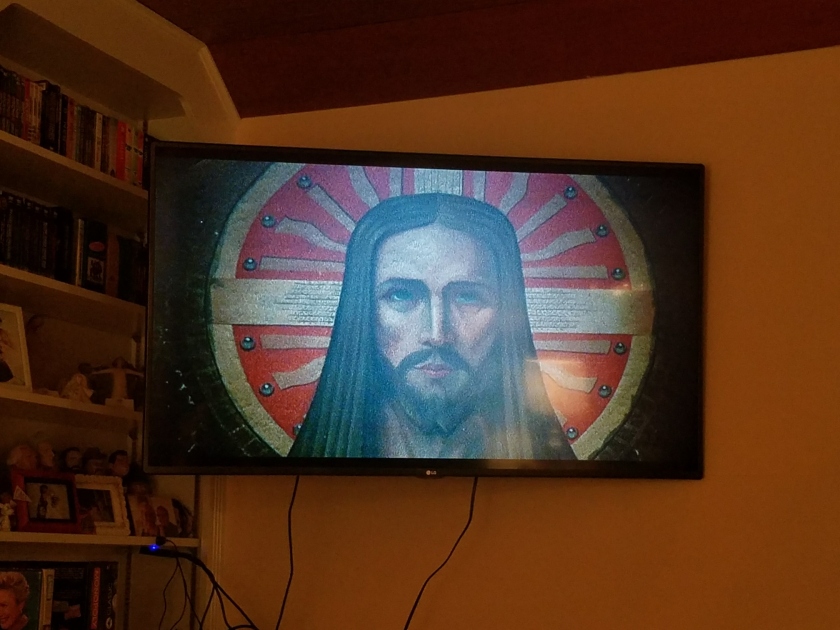 The Princess Bride is a great story with a really simple frame narrative. A sick boy is being told a story by his grandfather. It is simple, but it is effective. As the story goes on the boy’s interest grows greater and greater. The interesting thing to consider is that the story is being seen through the boy’s imagination and it could be imagined many different ways and probably not the same way twice.

The story features a young Cary Elwes in the leading role seeking to recover his long lost love. There is plenty of swashbuckling and amusing adventure featuring some hilarious moments. The movie is tied together nicely by a lot of great character actors. Mandy Patinkin is fantastic as Inigo Montoya on a quest to avenge his murdered father. Christopher Guest, future Star Trek: Deep Space Nine role player Wallace Shawn, Andre the Giant, Billy Crystal, and Peter Cook stand out in impressive small roles. These characters serve to tie Westley’s (Cary Elwes) quest together into a coherent narrative and provide interesting moments when Westley is not the main focus of the action.

The settings are also really cool, particularly the forest that Westley needs to traverse to escape from the kingdom and rejoin his pirate band. There are some really neat practical effects employed that are underrated in the CGI universe of today.

It is a beautiful, family friendly, fantasy movie. See it.

Rocky is the story of an underdog boxer from Philadelphia getting a title shot due to serendipitous circumstances. Rocky (Sylvester Stallone) has been given up on by everyone. His former trainer Mickey (Burgess Meredith) has cleaned out his locker and tells him he’s a bum. The local crime boss that employs him to lean on people and collect his debts thinks he’s too soft. Rocky is down on himself too. He has tried to strike up a romantic relationship with Adrian (Talia Shire) but has been shot down again and again. He knows he isn’t too bright and sixty plus fights worth of blows to the head probably hasn’t helped the situation.

Apollo Creed (Carl Weathers) is planning to defend his heavyweight title in Philadelphia when his opponent is injured. Having already invested a sizable amount of money into promoting the contest, a new challenger is sought out. Creed decides that he wants to capitalize on the underdog story an unknown challenger would bring to the table. He chooses Rocky based on his nickname, “The Italian Stallion.” Things begin to look up for Rocky. He starts training prolifically to get into shape for the fight. Adrian agrees to go out with him if only to get away from her alcoholic brother Paulie. Turns out she likes him. Rocky reconciles himself with Mickey. Lastly, he is due for a huge payday. A 150,000 dollar paycheck is coming his way for taking the fight.

Rocky is not really a boxing movie. Boxing is the subject, but there is much more to it. On one level Rocky is a love story. On another level Rocky is a story about the difficulties and associated poverty of city life. Rocky plays it straight and doesn’t give into the grimness of his surroundings, but instead perseveres through them. His performance reminds me of Marlon Brando’s role in On the Waterfront minus the anti-communist overtones.

Sylvester Stallone is great as the title character, but the minor roles also really stand out. Talia Shire, Burt Young, and Burgess Meredith all were nominated for Oscars for their performances.

Rocky is a classic with depth if you look below the surface. See it.