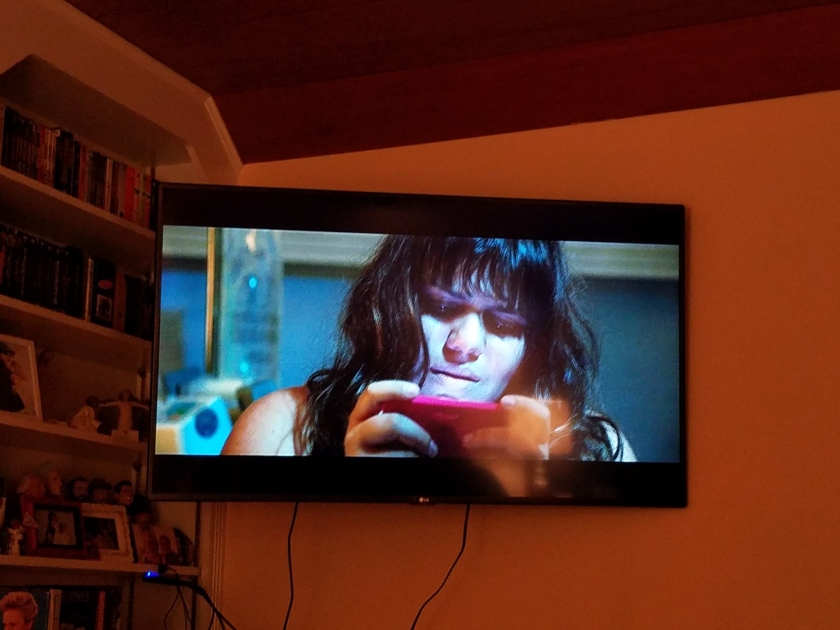 Friend Request is a mess operating on a paper thin premise. Laura Woodson (Alycia Debnam-Carey) is a popular, pretty, college student. Everyone loves her and she has tons of friends, especially on Facebook! One of the students in her psychology class is a strange duck. She starts talking to Laura and adds her as a friend. Marina (Liesl Ahlers) has no other friends and begins to obsess over Laura messaging her consistently day and night. Eventually, Laura excludes her from a social event and Marina becomes confrontational. When Laura unfriends her, she commits ritual suicide.

Marina then becomes a demon haunting people’s computers and social media accounts (seriously) and convinces them to kill themselves through elaborate hallucinations involving wasps. This is laughably ridiculous. While going to a funeral for several of her friends and through several other serious events in the movie Laura Woodson’s friend level is tallied through an in movie HUD similar to a video game. A significant portion of the movie is conducted through Facebook screens. If you are a good friend of Laura nd try to unfriend her you can’t. Laura has things uploaded to her Facebook account that are gruesome, but she can’t delete them. The movie gets more ridiculous when they figure out Marina’s origins. They are some of the most ridiculous origin stories ever put down on paper. Somehow, they even manage to work in a really terrible romantic triangle. The reveal is less than stellar and the end game is ridiculously obvious and asinine.

It can’t decide if it is a horror movie or a social commentary. No one involved in the making of this movie should ever work in Hollywood again. Skip it.

Coraline is a girl who is intensely dissatisfied with her family. They have just moved into the Pink Palace apartments and life has not been good to them. The apartments are in the middle of an ethereal hinterland. Coraline is quickly introduced to her neighbors which include an ominous black cat, a busty old opera singer, and a neighborhood boy with crazy contraptions for his bicycle. Her mother works online as a gardening expert. Her father also works online and neither of them have any time for Colarine. The animations for both of them make them seem ghastly.

Coraline quickly finds a tiny door that leads to a world similar to her own reality, but everything in it is perfect. Her mother and father in the other universe are magnificent cooks. They are clean. They pay attention to her. They have fun. It is everything Coraline has wanted out of her actual parents, but it comes with a price. Coraline must make a fairly gruesome sacrifice in order to be able to stay there and it becomes apparent that all is not as it seems. The end result is a madcap fantasy with great animation, voice work (the dulcet tones of one Keith David), and fairly sinister for a PG movie.

I’ve used this movie at school for several different reasons including a book to movie comparison that was a lot of fun. It is actually fairly metaphysical and a bit trippy. It is quite complex for a children’s movie. It is a great animated movie. See it.