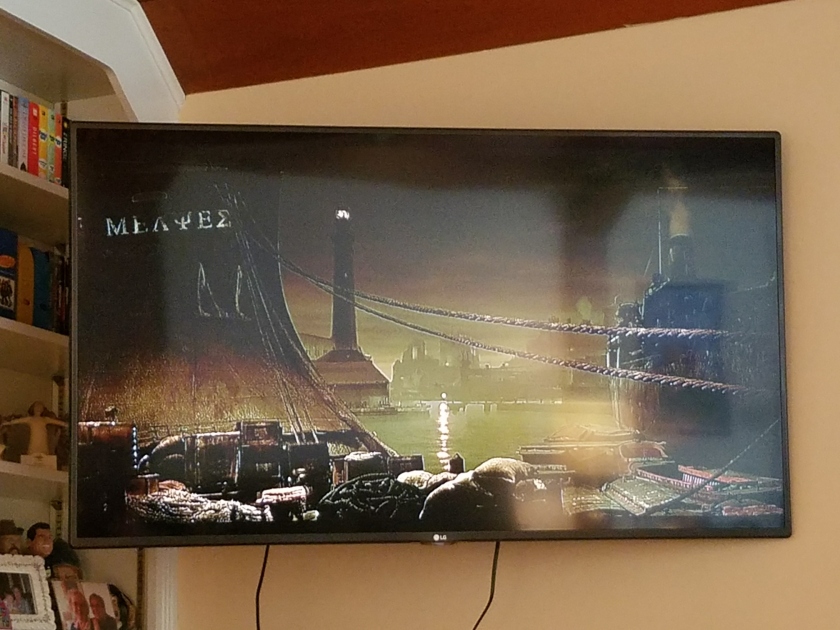 The City of Lost Children is a wickedly unique surrealist fantasy. The movie opens with a dream sequence featuring several devious Santa Clause and a flatulent reindeer. The scene is terrifying for the child in the dream who wakes up screaming. The creator of this wicked experiment Krank (Daniel Emilfork) also wakes in screaming terror followed swiftly by a small group of clones. We are then introduced to Irvin a disembodied brain that communicates through phonograph speakers. Things get stranger from here and it is stylistically fascinating with a very steampunk style.

Each character has their own motivation that makes the movie compelling beyond a design point of view. Ron Perlman plays hulking strong man One as he attempts to care for orphaned children. Krank is attempting to harvest dreams from children because he himself cannot and it has ruined his existence. Inadvertently he has kidnapped One’s favorite orphan. A street urchin named Miette forms a strong and strange attachment to One and wants to be his daughter. She agrees to help him find the kidnapped orphan One is in search of in hopes that they will form a family. Her former “employers” are not keen to let her go and are in hot pursuit of the female Oliver Twist. The Clones wants to find their original whom they practically worship and various other characters are motivated by all kinds of different drives. It makes for a movie in which you aren’t really sure what is going to happen next.

Verdict:
Every element of the design process was carefully considered during the make of this film. There is not one, but three murder via seagull, Borg-like creatures that form a cult, and the most inventive use of a flea and a jack-in-the-box in cinematic history. See it.

Delicatessen features the same directors as The City of Lost Children and a similar style. The world has been devastated by a war, food is scarce, and people have taken to a very orderly form of cannibalism.

Clapet, the butcher, (Jean-Claude Dreyfus) puts advertisements in the city paper to attract young men looking for work. After a period of time he carves them up and serves them to the tenants of his delicatessen / apartment building. The apartment building is filled with an assortment of characters that are quirky and hilarious. They are all in on the trap, so their interactions with each other are interesting. They know if they don’t pay their rent they might be next. Pay is negotiable. One customer pays with sex, another with lentils, another with corn. Money is valueless, but family members are negotiable.

The first half of the movie is very dark as Louison (Dominique Pinon) arrives in town and swiftly falls in love with the butcher’s daughter. They have a quick and quirky courtship while the heavily armed Postman lusts after Julie Clapet. Julie (Marie-Laure Dougnac) struggles on her dates because she knows her father might want to eat him and he is unaware. This might be a good source of stress. This relationship eventually builds into the movie’s absurdist climax as she enlists the help of Troglodites to rescue him from the apartment building.

The second half is much lighter and doesn’t always balance well with the first half. The denizens of the delicatessen are a comedy routine of their own. One apartment is full of snails and frogs. The man has adapted to the lifestyle of frog and eats flies. Aurore, a rich woman, lives on the top floor with her husband. She wants to die and comes up with elaborate ways to attempt suicide that are hilarious to watch unfold. The end is bizarre, yet heartwarming.

Delicatessen is a strange movie with a strong first half and a solid second half. You are in for a trip. See it.