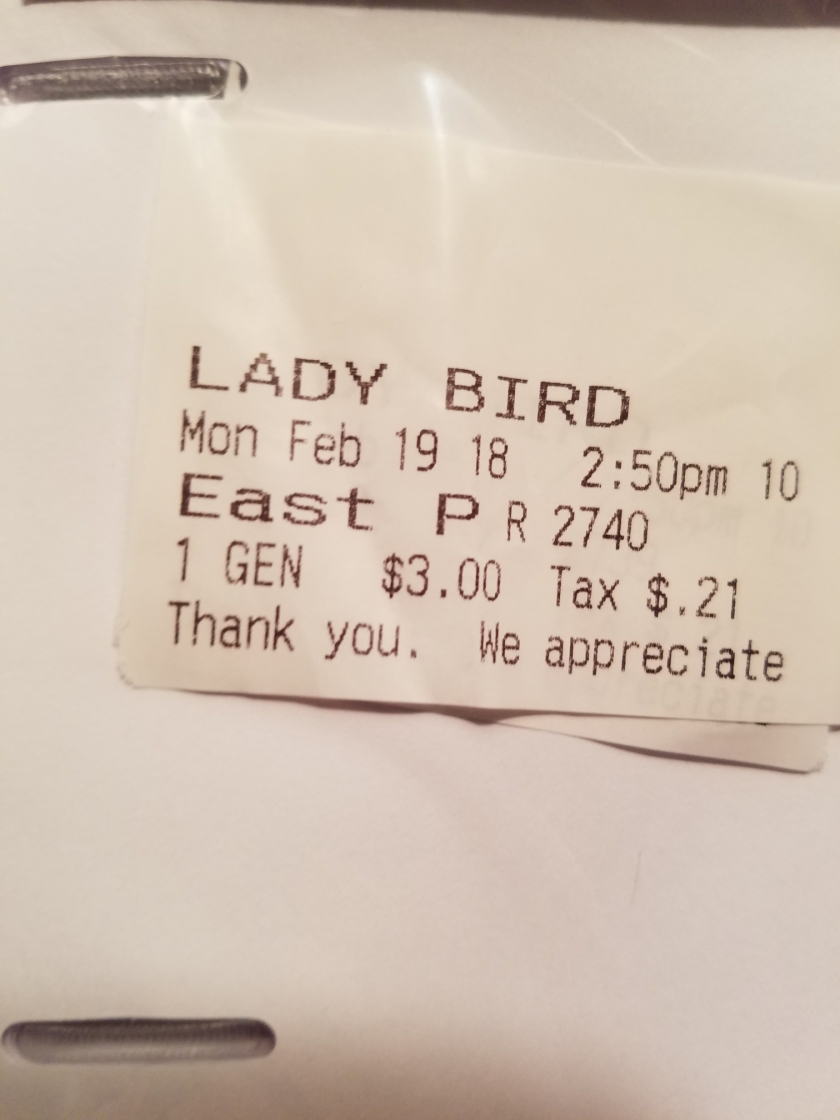 Where did I watch it?: The Patriot – East Providence, RI

Lady Bird is a charming coming of age dramedy starring Saoirse Ronan in the title role. Christine “Lady Bird” McPherson does a lot of things many high school seniors do every year. She fights with her family, gets ready for prom, has a fling that feels like true love, participates in the school musical, applies for colleges, etc. These are things we see portrayed over and over again. However, Lady Bird’s story is interesting because of the authenticity and the humor that accompanies being bored and conflicted as a middle class American youth.

Lady Bird is set in Sacramento, California in 2002 at the beginning of what would become a period of economic disaster for middle class Americans. The United States stoked the Iraq War (lying to everyone, I might add) and the economy went to shit. Lady Bird attends a Catholic school because her brother saw someone get stabbed at the public school. Her father loses his job and ends up in the same job market as his adopted son. She makes a surprising revelation about the boy she has been seeing. Everything involving her family members is a fight because she isn’t perfect and her parents are very quick to reminder about the privileged life she leads. She applies for colleges she knows she can’t afford, so that she doesn’t have to wallow away four years at the school 30 minutes away that is best known for its agricultural program. Along the way we also get fragmentary glances at the lives of other people who are making sacrifices and getting through a difficult time in their life. But, just like in real life, teenagers have a narrow point of view, so we never really get the full story on any of their problems.

What makes Lady Bird great is that despite all the potentially heart breaking subject matter, it’s still funny. The humor is on the dry side, but not chalk dust dry. The authenticity of the story and the humor around the edges makes it such an authentic capture of white middle American life on the coasts in the early 2000s that is worth seeing for that alone. But, you’ll also get some laughs along the way.

Lady Bird is not a light jaunty comedy, but it brings humor to the every day. I think it likely Lady Bird will be shut out of the major award categories, but I hope it will be able to take home one of the minor awards. Even if it wins nothing, who cares. See it.