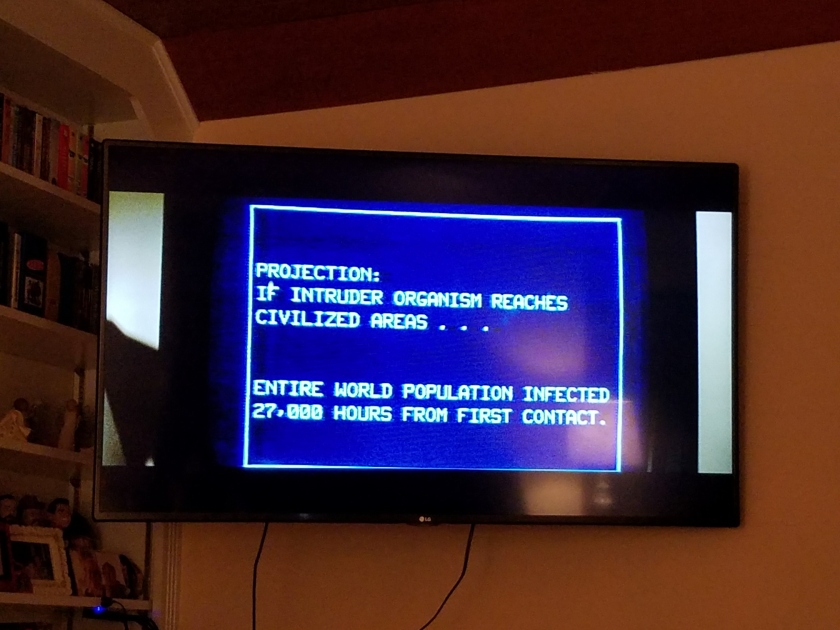 The Thing opens with a Norwegian helicopter following a lone husky across the Antarctic desert. After failing to shoot the dog they find themselves unable to communicate with the Americans they come across and end up in a firefight. All the Norwegians end up dead. The dog is taken into camp and wanders around for nearly two days. In the mean time a team is sent to investigate the Norwegian camp where they make horrific discoveries that their chief scientist can not explain. The special effects used for these creatures designed by Rob Bottin are incredible practical effects. The arrival of the creature generates tremendous fear and paranoia. No one can be trusted.

The Thing is a cinematic gem with masterful direction and special effects. The cast is perfect. Kurt Russell is great as the taciturn helicopter pilot MacReady. Wilford Brimley is perfectly cast as the mad scientist Blair. Keith David provides the perfect foil for MacReady in his turn as Childs. The rest of the cast is perfect as well with my personal favorite among the others being David Clennon as Palmer. The movie features an all male cast which is important to the film and heightens the paranoia and aggression later in the movie. The movie has no subplots. Combating the thing and each others heightening paranoia is the movie. Even the movies animals have fantastic performances. The husky featured in the movie’s opening first quarter provides a truly terrifying presence and is able to act like a dog pretending to be a dog. It is incredible.

Ennio Morricone was in charge of the music for the movie and his work is incredible. The music mixed with the sound effects creates mystery and terror with perfectly timed movements at precisely the right moments. The sound effects for the creatures and the ambient noise is all perfectly orchestrated.

The Thing is a cinematic essential. Some have interpreted it as providing a parable of the Cold War era which may have been unintentional, but is still effective. It shows the effects of fear and paranoia in the face of crisis. It is a masterpiece. See it.

I played with Stephie, Keegan, J.R., Jamie, and Kaz. It was a damn good game, but us humans lost and the imitations led by Keegan and Stephie achieved victory. We pegged Stephie, but we didn’t have Keegan at all. Snake in the grass! We are all doomed as a result.