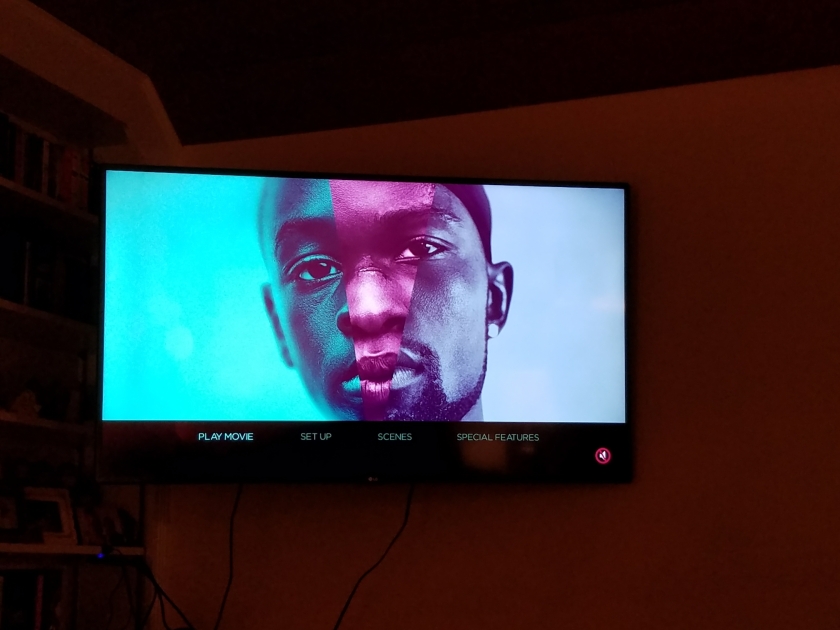 In the wake of the “Oscars So White” controversies of recent years Moonlight won the Oscar for Best Picture in 2016. At the time, I was firmly of the belief that it likely won because of its entirely non-white cast. After having seen the film, I believe it won not only because of the cast, but because of the fact that the main character was not only black, but also gay, poor, bullied, an ex-convict, an abused child of a drug addict, suffering from post traumatic stress, and in every conceivable way marginalized by society. In short, representing the Academy’s solution to a public relations nightmare. While the movie presents a heart breaking coming of age story, it fails to be an interesting movie namely because its main character lacks inspiration in almost every way possible.

Moonlight is conducted in three parts. It follows the childhood, adolescence, and young adulthood of Chiron. We are first introduced to Little when he runs from bullies and meets up with Juan played by Mahershala Ali. Ali does a great job in the first act of the movie and is by far the movies most compelling character, which becomes a problem in the 2nd and 3rd acts. At first, I thought young Chiron played by Alex R. Hibbert was the opposite of Lion’s child star Sunny Pawar, but after moving into adolescence it is plain that Chiron’s flatness is the way the character was written. Chiron has no, as in zero, personality. He is soft spoken to the point of muteness and aside from the fact that he is poor and hates his mother we don’t learn much about him until nearly an hour into the movie. Given Chiron’s circumstances it seems like if he had even the slightest back bone or personality at least some of the problems in the movie could have been mitigated. Obviously that would not have solved everything, but some of the conflict is almost directly attributable to his lack of character traits. He drifts along like seaweed in the ocean. While I think damaged is the way writer and director Barry Jenkins wanted him to be seen, it does not make him a very interesting character to follow.

Another significant problem is that nearly every moment of potential action happens off screen. A significant character is killed off screen and little emotional reaction comes from our main character. Chiron’s mom, played with fire by Naomie Harris, turns tricks for drugs, but little of either is actually seen in the movie. After a surprising sexual encounter a conversation that could have provided some meaning is cut out of the movie. The movie would have worked well as a stage production. It has sparse dialogue and little action. I understand that Chiron has been damaged by the life he is leading, but ultimately he is so thin as a character that he is difficult to relate to. The sound is also a problem as it foregoes a traditional soundtrack and relies on background music and ambient noise.

At the end of the day, Moonlight is a story about repression and predestination. The movie makes it clear that Chiron was destined to end up where he does. His upbringing and his nature made it inevitable that he would reach that point in life. The repression of an individual by society is what makes it happen. While to a degree I think this rings true, it leaves the individual as nearly a blank slate that lacks the ability to advocate or the free will to do anything.

There are a few solid performances in supporting roles, but our main character is a chore. The movie making industry is decidedly too white, but that doesn’t make Moonlight a best picture. See it, but lower your expectations.

I got my 30 minute walk in today and went 1.2 miles. My left foot is bothering me and aching from yesterday. I’m hoping it feels better in the morning.