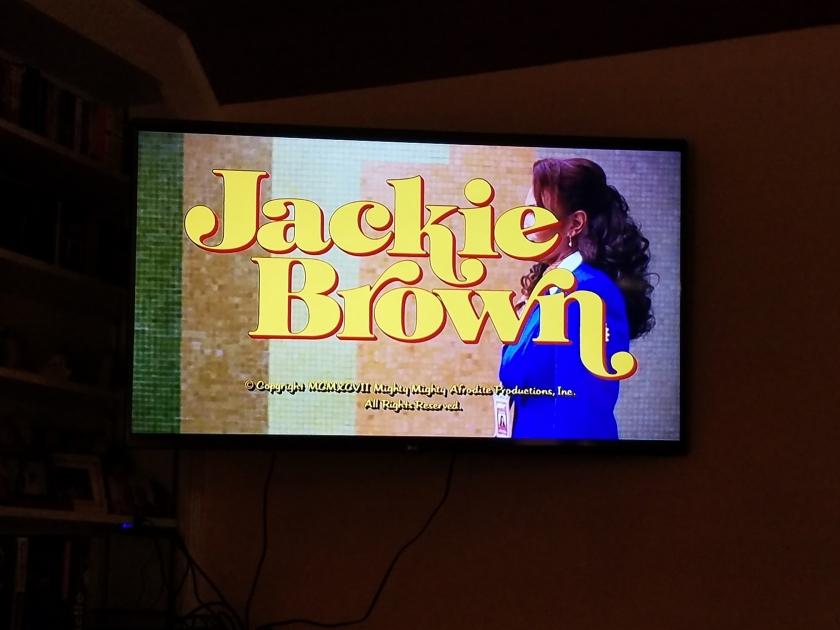 This is my first review of a movie that is not contemporary, so I hope these go over well. I have not seen three Quentin Tarantino movies and this was one of them. I still need to see The Hateful Eight and Kill Bill Vol. 2. I saw Kill Bill Vol. 2 in theaters, but was a little inebriated, and I don’t recall much of the movie. So, I need to see it. This is not Tarantino’s best work, but it is still damn good.

The movie opens with flight attendant Jackie Brown, played like an absolute badass by Pam Grier, hustling to her plane because she’s late. After the title sequence we get introduced to Ordell Robbie played by Samuel L. Jackson, his ex-con associate Louis Gara played by Robert De Niro, and his Robbie’s play thing Melanie Ralston played by Bridget Fonda. They are hanging out in Ralston’s apartment watching one of the best movies within a movie ever called Chicks Who Love Guns, which is basically just good looking women shooting exotic weapons. During this exposition we find out that Gara is fresh out of jail after a four year stint for armed robbery and Robbie is making a lot of quick money selling guns. Ralston just wants to get high. A match made in heaven.

We quickly see that Robbie isn’t someone to mess around with after a scene with Max Cherry, a bail bondsmen in a steely turn by Robert Forster, and subsequent dealings with Beaumont Livingston played by Chris Tucker. Coming back from Mexico, Jackie Brown is busted with 50,000 dollars and 2 ounces of cocaine. Robbie has sinister intent for Brown after she gets busted, but the story quickly turns into a story about who can pull off the ultimate double cross and make it out alive as Robbie talks non-stop about the 500,000 dollars he has stowed away in a Mexican vault.

There is a lot to like about this movie, especially the featuring of a lot of middle aged characters. It has commentaries about love, achievement, and yes, money as one reaches the years of life where you start to reflect on your accomplishments. It is a good heist movie with a Rashomon-like plot sequence during the climax, but it is better looked at as a movie filled with great performances including turns by Michael Keaton and Sid Haig in a small role.

Tarantino is reliable. He does not direct bad movies and Jackie Brown is no exception. It is not his strongest film, but it is better than a lot of other things in the marketplace. The performances are strong and the movie as a whole is very entertaining. Enjoy the ride. See it.

Today, I took as a rest day because my back was barking a little bit and it was a scheduled rest day anyway. Tomorrow, will be a run/walk combination.